Cruz (23-2-1, 16 KOs) feels that he would need to push the fight against Haney to make it exciting for the fans if the two face each other.

The highly ranked Pitbull Cruz is interested in facing Gervonta ‘Tank’ Davis in a rematch or challenging undisputed lightweight champion Haney (28-0, 15 KOs) for his four titles.

In the meantime, Cruz, 24, is fighting this Sunday, September 4th in the co-feature spot against Eduardo Ramirez (27-2-3, 12 KOs) in a 12 round fight on the undercard of Andy Ruiz Jr. vs. Luis Ortiz on Fox Sports PPV at the Crypto Arena in Los Angeles.

“I like Gervonta and Devin as potential opponents equally,” said Isaac ‘Pitbull’ Cruz to Fighthype. “If Devin wants to fight me, then give me the chance to do so, and I’ll gladly come out there and try to strip those titles away from him.

“In a fight against Devin Haney, I think Devin is a boring fighter, sort of like the Floyd Mayweather style of fighting. But in the end, I think I would bring enough action to where it would be a great fight for everybody.

“Devin is a very capable counter puncher and not easy to figure out at all, but I feel like we’re prepared to figure him out if needed.

“I think he wants fights to be between fighters from different countries and not between Mexicans. That’s all, and I understand him. I get where he comes from,” said Isaac Cruz about Canelo Alvarez saying he won’t fight other Mexicans.

“I feel happy to be fighting a compatriot Ramirez. It’s going to be a really good fight between Mexicans, and the fans are going to be the true winners.

“The WBC did want that, but Team [Ryan] Garcia wanted to rush us, push us and bully us,” said Pitbull Cruz on why the fight with Ryan Garcia didn’t happen. “We weren’t going to allow to be bullied. We didn’t want to be pushed around.

“We suggested a date, and they didn’t want to accept that date. In the end, it just kind of dissolved. That’s all.

“It’s up to Team Gervonta. Do they want to push themselves or just settle for something less,” said Cruz about a rematch with Gervonta Davis. 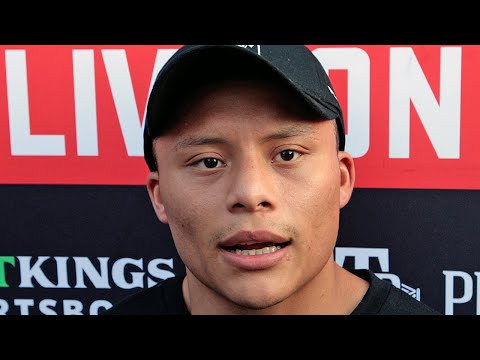