Having been created little over a decade ago, The Daily Mile now takes place in 14,000 schools from 87 countries. More than three million children run a mile a day as part of the initiative. From humble beginnings at a primary school in Stirling, Scotland, it has become a global phenomenon when it comes to promoting health and wellbeing in youngsters.

Its growth is fast-paced and relentless, too. In mid-April, The Daily Mile announced a partnership with the World Athletics Championships Oregon22 and, since then, more than 900 schools in the United States have signed up to the concept.

Those championships in Eugene proved a good opportunity to hold a celebratory lunch to reflect on the success of The Daily Mile. Among those in attendance were World Athletics president Sebastian Coe – a keen supporter of the scheme since its early days – plus USA Track & Field CEO Max Siegel, UKA’s new CEO Jack Buckner and the founder of The Daily Mile, Elaine Wyllie.

Since 2016 The Daily Mile has been supported by INEOS, the organisation behind Eliud Kipchoge’s successful crack at the sub-two-hour marathon barrier in Vienna. In Eugene last month AW met with John Mayock and Fiona Paterson from The Daily Mile/INEOS team in order to find out more about its growth.

“The energy around The Daily Mile is fantastic,” says Mayock. “When a door opens, three more doors open ahead of you. It’s so simple that a lot of people recognise it now and it doesn’t cost anything, so people are keen to try it out. It has so many health benefits and lots of organisations and partnerships feel The Daily Mile is worth exploring.”

Indeed, partnerships have already been struck with UK Athletics and the home country governing bodies, plus USA Track & Field, World Athletics and many others.

“It’s a ready-made programme to plug in and play,” adds Mayock. “INEOS are really passionate about health and wellbeing and people being active and The Daily Mile fits the mix for them to support.” 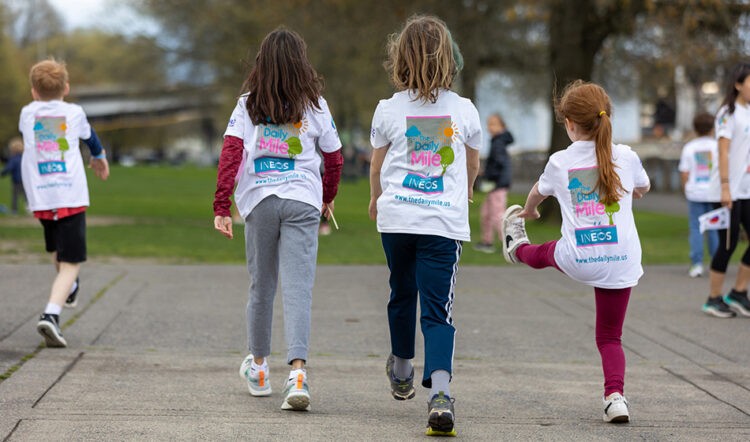 Mayock, now 51, was Britain’s top miler during his athletics career and is a three-time Olympian. He says that as a teenage runner himself, though, the friendships and social side of athletics was the thing that drew him into the sport. “The medals and success came a lot later,” he says.

Research is showing that not only does The Daily Mile improve the physical health of children, but it has mental and physical benefits. Work at the University of Stirling has shown that children who walk or run for 15 minutes during the school day are mentally and physically sharper. With such clear benefits, the challenge now is to handle the huge interest.

“There’s not a day that goes by when I don’t emails from people wanting to be part of the programme,” Mayock says, “but it’s having the time and resources to help them.”