Charlotte Purdue’s recent journey in athletics has not been straightforward.

Before the Tokyo Olympics, the 31-year-old was refused a discretionary place in the marathon even though she had a medical exemption to miss the Olympic trials a few months earlier.

Then, earlier this summer, at the World Athletics Championships in Oregon, Purdue pulled out of the race at 19km due to breathing difficulties. A day later she tested positive for Covid-19.

It’s been tough for Purdue but at last year’s TCS London Marathon, she proved a point after clocking a stunning personal best of 2:23:26 to go what was then third on the UK all-time marathon list behind Paula Radcliffe and Mara Yamauchi.

It was the fastest marathon by a female Brit since Yamauchi’s 2:23:12 in 2009. Since then, Jess Piasecki has gone ahead of Purdue after running 2:22:27 in Seville back in February.

Even though Purdue dropped out of the marathon in Oregon, she ran 2:25:26 at the Boston Marathon and definitely isn’t short of mileage going into her fourth TCS London Marathon.

“I feel pretty good,” Purdue says. “I still did the training for the worlds so I still had all that work in my legs. It has been a busy year for me and Boston was pretty busy for me.

“Last year, I had a few niggles earlier in the year. London was my first marathon build-up and I’ve now had three marathons in the space of less than a year. Although I’ve had illnesses this year I haven’t had any injuries so I feel a lot stronger with London, Boston and the build-up to the world championships. I feel like I haven’t had any time off so I’m definitely not unfit!

“Every time I come here [London] I try to run faster but it’s hard to get a two minute personal best every year.”

Purdue’s wants to use the experience of a heartbreaking time in Oregon as motivation to run even faster in London than she did last year.

She lines-up against a strong elite field, which even without world record-holder Brigid Kosgei and Eilish McColgan, hosts defending champion Joyciline Jepkosgei and the fastest-ever female marathon debutante Yalemzerf Yehualaw. 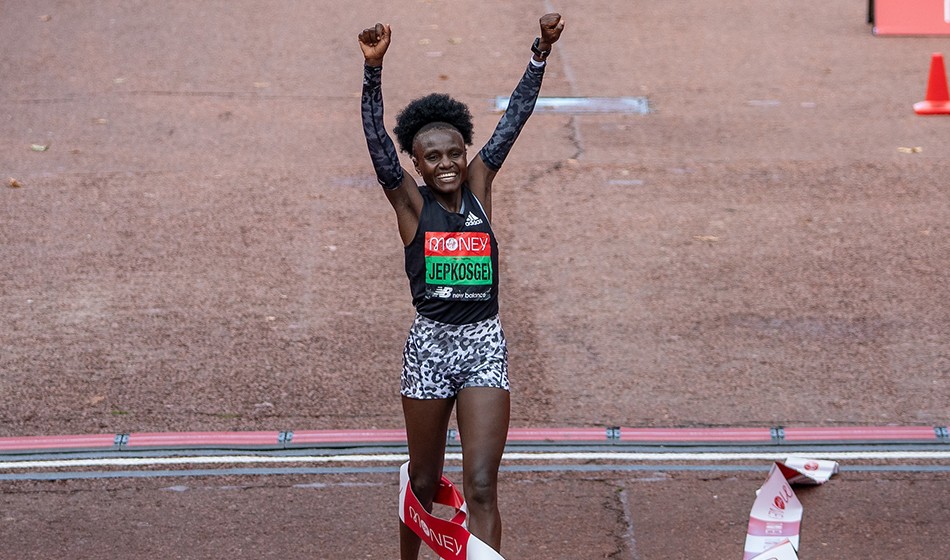 At the last TCS London Marathon, Purdue recorded a personal best even after running 12 miles by herself. If she can stick in a pack for a longer period, who knows what she might clock?

“My chest was so tight [at the world championships] and I couldn’t breathe,” Purdue reflects. At least I had a reason why I felt so terrible at 5km.

“I didn’t even know I had Covid-19. Sometimes in a race you start off and don’t feel great but it’s just a bad patch and you improve. At 19km I just made the decision that I was getting slower and made the decision.

“Obviously Paula [Radcliffe] has set that massive mark which is going to be very hard to beat! If I can come to London every year and run a personal best then that’s good for me.

“I hopefully don’t have to do that [run alone]. If I do, given I did it last year in London and then in Boston, I’m ready for it. I’ve got a lot of practice.”

This will be the first major sports event down The Mall since the Queen’s funeral a fortnight ago and Purdue thinks it will be “strange looking back” but is “hopeful of crowds lining the streets all the way across the route”.

Purdue first experienced the taste of the TCS London Marathon when she was a teenager and won the traditional pre-cursor, the mini marathon, back in 2006.

“I felt good the whole way and it felt shorter than what I was expecting!”

Innes Fitzgerald – who broke the UK U17 3000m record this past summer and is coached by Gavin, husband of @jopavey – on her victory at the Mini @LondonMarathon 🔥🥇

This past weekend saw the class of 2022 of strut their stuff and double Olympic marathon champion and world record-holder Eliud Kipchoge presented the medals at the end.

One of his aims within the sport is to complete all six Abbott World Marathon Majors – he has Boston and New York to go – and Purdue wants to complete that goal in her life as well.

“I would love to run Berlin and all the majors but I just can’t turn down London this year as I love the race so much,” she adds.

“Paula Radcliffe was so inspiring to me and when I was younger I said to my mum and dad that from that I wanted to run the London Marathon one day. For me it [the mini marathon] was great that they have that, especially to finish it on the actual course.

“I’d say just to any young runner to continue to enjoy it and what you do. It’s basically all you can ask for. Don’t put too much pressure on yourself and hopefully you can improve year on year. Just enjoy the process!”

You can find results from the TCS Mini London Marathon here